Generation of Stable Profit through the Ability to Innovate

The strength of SEKISUI CHMEMICAL Group lies in its ability to innovate. The Group has been faced with a harsh external environment on many occasions in the past. The constant growth strategies and structural reforms that we have been implementing have led to enhanced profitability and, in recent years, achieved the generation of stable profit. 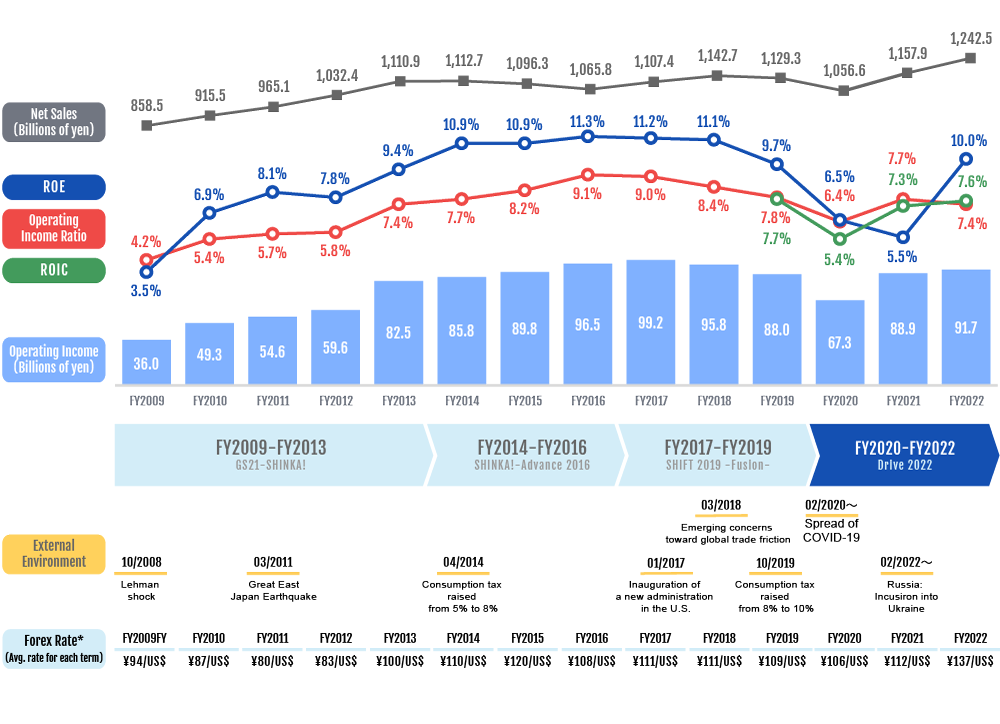 Note: In the case of numerical values denominated in billions of yen, numbers below a billion are rounded up or down to the nearest hundred million.

Products Based on Our Technological Prominence That Help Resolve Social Issues 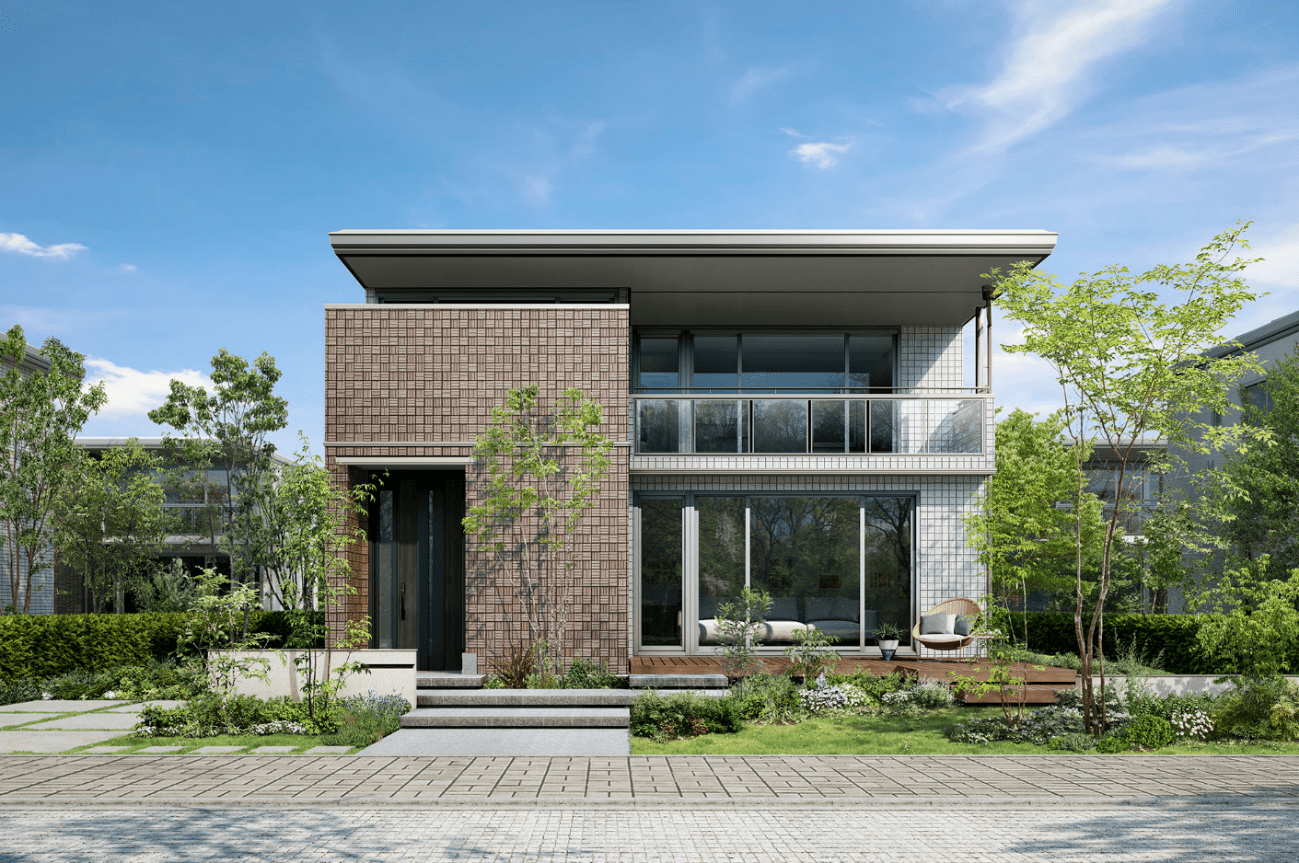 SEKISUI HEIM is characterized by its Unit Construction Method by which a house is divided into modular units and built at a factory. Most of the house construction, including the assembly of the basic modular units, is undertaken inside a quality-controlled factory that is not affected by the weather. Due to high precision and quality control, which are the benefits of factory manufacture, we are able to provide high-performance housing in accordance with design plans.

Computer graphic image of ESLO HYPER movement during an earthquake 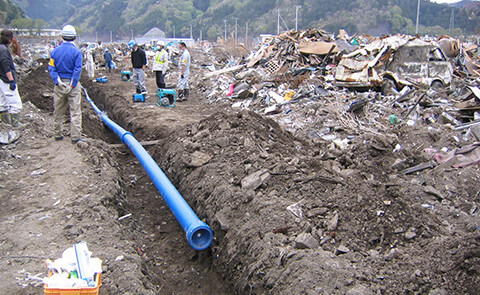 In 1952, SEKISUI CHEMICAL’s ESLON pipe was launched as the first rigid PVC pipe in Japan. Since then, as a pioneer of PVC water supply pipes, the Company has been contributing greatly to a more widespread water supply.
However, water mains have long been primarily cast iron pipes . From the experience gained from water outages when a major earthquake has occurred, there has been a demand for water pipes that have excellent durability and are able to deliver water stably even in the event of a disaster. In response to those demands of society , the polyethylene ESLO HYPER pipe arose from our advanced technologies, wealth of know-how, performance and quality, and the monozukuri (manufacturing) concept that underpins them.
An earthquake-resistant pipe that can prevent damage and water leaks even if an earthquake or land subsidence occurs, ESLO HYPER bends to match the movements of an earthquake and thus will not become disconnected or rupture. Lightweight at one-sixth the weight of steel pipes and flexible, ESLO HYPER’s unique joint connections formed using electrofusion (EF) technology greatly improve workability. Also possessing excellent corrosion resistance and hygiene characteristics, ESLO HYPER can thus be used with peace of mind for long periods of time.
We will supply clean and safe domestic water both in normal times and in the event of a disaster. 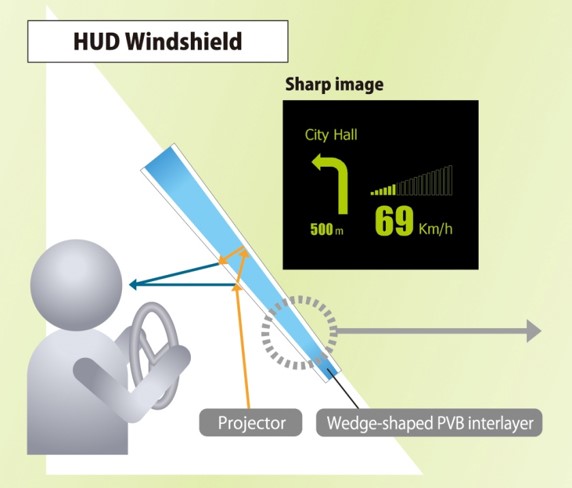 How the HUD windshield works to enable clear projections

Supplying Safe and Highly Functional Laminated Glass to the World

Laminated glass interlayer film (S-LEC™ Film) is a highly adhesive and transparent film sandwiched between the laminated glass used in automobiles and buildings. In many countries around the world, including Japan, the use of automotive interlayer films is obligatory for windshields, and they are also being used for other parts, such as the side and roof glass.
Interlayer films serve basic functions, such as the prevention of injury caused by shattering when the glass breaks in a collision and reducing UV rays. We produce interlayer films for soundproofing and heat insulation as well as combined soundproofing and heat-insulating interlayer films that meet the needs for comfort and energy conservation. Our wedge-shaped interlayer films are also used in head-up display (HUD) systems that display speed and lane information on the windshield. To meet what is required of interlayer films and the needs of the times, we have been realizing high functionality in successive interlayer films.
In 2015, we announced the development of self-luminous interlayer films that enable information to be displayed over an entire windshield to improve safety when driving an automobile and to support the increasing usage of in-vehicle IT.
In the years to come, we will continue to lead the world with cutting-edge technological capabilities to contribute to improvements in the safety, comfort, and environmental friendliness of automobiles.

SEKISUI CHEMICAL At a Glance